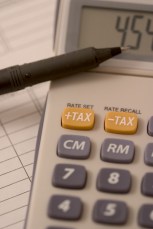 Burgers, pools, picnics — set against the solemn backdrop of remembrance for the sacrifice of so many thousands who have laid down their lives so we can have those freedoms. However, when you talk to veterans (as I get the chance to do in the course of our tax preparation work here in the Louisville area), they often tell you that these very freedoms (the ones much bigger than backyard barbecues, of course) are exactly why those sacrifices are worthwhile.

So in a sense, parades and picnics are exactly the right sort of thing to honor those men and women.

Well, today, I have some tax “business” to share with you, straight from Roberts tax headquarters, as well as a bit of a charge, so to speak…

2012 Numbers For Tax Preparation for Louisville TaxPayers
We pay attention to these things here in Roberts-world so you don’t have to.

This is an election year, so things can always change (though, it’s a good planning principle to realize that Congress doesn’t usually like to rock the boat during presidential election years) … but I wanted to make sure you had the rates and numbers for the 2012 tax preparation season.

Why am I sharing these with you now?

Two reasons: 1. So you can plan ahead (and more about that in a moment) and 2. so you can take advantage NOW of favorable conditions for 2012 which seem likely to change in the years ahead. And, so you can see some not-so-favorable news for this year…

First, the 2012 Tax Rates (for taxpayers in Louisville and nationwide):
For 2012, there will be six tax rates:

The “Dreaded AMT” (Alternative Minimum Tax)
The Alternative Minimum Tax, or AMT, is a parallel tax system. Every taxpayer is responsible for paying the higher of the regular tax or the minimum tax. In 2012, the thresholds will be significantly lowered, and more people will face this alternative system, without proper advice and planning.

AMT Exemption Amounts for 2012
The alternative minimum tax exemption amounts for 2012 are scheduled to revert to the following levels:
$33,750 for single and head of household filers,
$45,000 for married people filing jointly and for qualifying widows or widowers, and
$22,500 for married people filing separately.
Source: Code Section 55(d)(1). Lower exemption levels mean that more taxpayers will be subject to the alternative minimum tax calculations.

So, here’s a good summary: navigating these two different issues without proper planning NOW could end up costing you and your family significantly.

There is no guarantee that you will save by speaking to us in advance.  But this I CAN guarantee: If you don’t speak with us, we won’t be able to save you a dime.